Written by Zach N.
Updated over a week ago

The Deals application features three primary tabs that allow you to control and review all activity concerning your deals and pipelines.

In this article, we are going to dive into the Reporting tab. We will explain how to read each section as well the various features you can use to filter your analytics.

This is the default view when you arrive at the Reporting tab. Let’s analyze each graph moving from left to right:

This section contains all of your new and active deals. In other words, these are all of your deals that currently have the status Open. The bolded number on the left is the count, or the actual number of deals. The number in parentheses is the total value that these deals are worth.

You can further analyze when these new deals were made by hovering over any point on the graph.

In this example, we can quickly read that our sales team created six (6) new deals on July 10, 2021. We then had a slower period over the next week before picking back up again on July 18th with another six (6) deals.

This tab shows all of the deals we won in the designated period.

The graph functions the same, indicating that we won six (6) deals worth $26,375.72. We can highlight points on the graph to see how many deals we won on a given day.

Likewise, you can chart how many deals you lost in a designated period with the final graph in orange. These are deals that were in a negotiation where the lead decided that they were no longer interested in making a purchase.

Switching Between Count and Value

You can toggle between alternate views for your graphs by utilizing the Count/Value toggle in the top-right corner. The Count indicates the actual number of deals. The Value prioritizes focus on the actual value of those deals instead.

By default, your reporting will fall under Count. Clicking on Value flips the number in focus.

This view is useful if you’re more focused on the actual dollars and cents more than the number of new leads and deals coming your way.

You can further customize your reporting by selecting the dates that you want your analytics to cover. 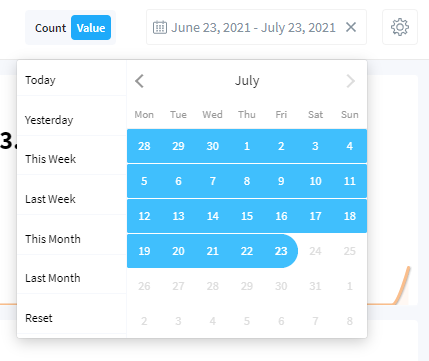 Click on the date range in the top-right corner to open up a calendar view. The tabs on the left allow you to quickly select predefined periods such as this week, last week, etc.

This new section of your reporting exists just beneath the graphs demonstrated above.

This table breaks down your various deals by analyzing how many deals moved into each stage on a specific date.

In our table, we can see that on July 11th we had three (3) leads enter as qualified, two (2) moved into contact mode, one (1) saw negotiations start, and one (1) with a scheduled demo. Those numbers change accordingly based on our performance with each following day.

This is useful for analyzing what stages of your pipeline are more successful than others. If you are seeing a lot of qualified new leads come in, but few are making it to a proposal or negotiation, you may need to revisit your approach or work with your sales personnel.

Just as we did above, you can hit the Count/Value toggle to show your numbers in dollars and cents as opposed to counts.

Likewise, changing the date period with the calendar will update the reported numbers in the Deal Stages Over Time section.

Competition is an excellent method for motivating a sales team. It keeps your team members accountable and incentivizes them to identify flaws in their approach and work to become better sales representatives.

To help with this, our reporting tab offers a Leaderboard section. This table contains all of the sales reps you have working this specific sales pipeline. It displays the number of new deals, deals won, and deals lost that are currently assigned to that rep.

In our example, we only have one sales rep working this pipeline. It shows that he currently has eighteen (18) open deals along with three (3) won deals and three (3) lost deals.

Note - The numbers in your leaderboard will only apply to the date period designated in your calendar. Sales representatives who are not assigned to these deals will not appear on the leaderboard.

There are still two additional methods to filter your reporting. The first is to view your analytics by a specific user. You can find a list of your team members in the column on the left side of the page.

You can click on the checkmark by one or more users to see performances for those specific team members. Each section of the reporting page will update accordingly.

Note - If you have many users within your account, you can use the magnifying glass to open a search bar at the top.

The final method for filtering your reports is to look at each sales pipeline separately. By default, your reporting tab will always show all pipelines.

You can select a specific pipeline by choosing one from the list within the left column. This list appears toward the bottom of the page.

Each section of the reporting page will update to show analytics for this specific pipeline only.

Note - If you have many pipelines within your account, you can use the magnifying glass to open a search bar at the top.

You can view reporting by BOTH users and pipelines. Click the checkmark next to the users you want to view. Then, select the specific pipeline below. Your reporting tab will then update to show the specific analytics for the chosen users within the chosen pipeline.

This covers everything you need to know about Deals Reporting. Take advantage of this tab to drive your sales team to future success!

Did this answer your question?